This outdoor wall used to be covered in ivy. You know that story. It looked pretty lousy after we removed the ivy, but we freshened up the colorbond and things are looking good.

A lot of people would have been perfectly happy with the old ivy wall: a green ivy blanket covering up the boring colorbond sheathing, with geraniums and wisteria woven through it. It’s full of life, it’s adorable. Etc. But we wanted our garden to be less traditional English cottage and more modern-Australian, with a combination of natives, edibles and architectural plants. The ivy wall had to go. (I won’t go on about my mission against English ivy, but if you’re in Australia, you should definitely plant something else.) 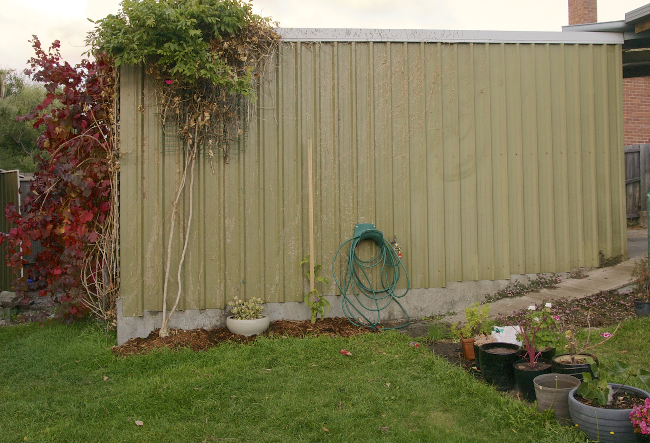 Here’s a couple more shots documenting the process of removing the ivy. 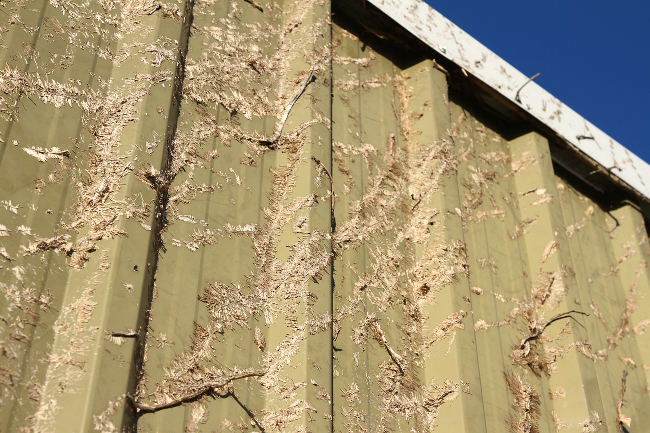 And here’s one more shot that shows what we were left with: a grillion fine ivy roots that had stuck onto the wall. I brainstormed ideas for what to do with our ugly bare wall, and decided to go with the simpler option of painting the colorbond. It’d still become a feature wall, but the wall itself would take a backseat to the plants.

Jamie used a pressure washer to blast off most of the root residue, and then I followed up with a non-scratching scourer sponge and a bucket of sugar soap. This took longer than I thought it would, but eventually we scrubbed off the roots and got the surface clean.

Some areas were damaged from pulling off ivy trunks, exposing the steel underneath. I got a can of Metalshield etch primer, which is intended for metal surfaces. The spray paint was useful as I only needed to prime in certain spots.

I looked up information about overpainting colorbond (or, I should say, COLORBOND® pre-painted steel) and learned a couple things, namely, 1) plain old acrylic water-based paint is the best option, and 2) overpainting colorbond can void a warranty on it. (This info sheet had further details on restoring old colorbond, check it out if you want to know more.) Here I was thinking I’d need some special roofing paint, but nope. That was a relief.

As for my paint colour… maybe I should check out paint trade shops, because the options for dark colours feel very limited. It did make it easy to pick out my final choice, though. Each chip in my hand looked fine, but together they practically formed a rainbow. When choosing colours, you want to compare them to one another so you can suss out the undertones, as any undertones will be much more pronounced when they’re up on a wall.

I chose the trendy charcoal option, but a warmer version. It’s more of a dark taupe. I thought it would relate better to the weatherboard house and bushy mixed border than a stark, pure charcoal wall. The colour is Dulux Namadji. I like it.

Would the paint finish have looked better if it were sprayed, rather than brushed on? Yes. Does that bother me? Not particularly. I have no idea how long the paint will last before fading or cracking, but I’m gunning for a few years out of it.

Here’s how it turned out. We actually painted this a few weeks ago before the wisteria began to bud; this is how it looked last week. It looks bare now, but we planted a passionfruit vine to go alongside the wisteria. They can fight it out.

I’m undecided on whether or not to paint the concrete slab underneath in the same colour. I think not having it painted draws attention to the colorbond sheeting and visually breaks it up in a way I don’t like, but Jamie pointed out that painted concrete will require maintenance. Hmmm.

(The hose also needs its rack back, or better yet, a hose reel.)

I was anxious to see how the wisteria would fare this year, after getting hacked at when I removed the entangled ivy and trellising. It’s looking healthy, hey? I intend to keep training it as a sort-of tree, letting it fill out and keeping it tied up in place with twine and hooks. Its exposed trunks are cool.

Our cat supervisor was out on patrol.

The bed at the bottom is my I-don’t-know-what-to-do-with-you patch. Potted plants I don’t have a designated place for and extra rocks I don’t know what to do with. They’ll keep. Right now I have a fig, a silver dollar jade, a pink cordyline, a dying begonia and a graptopetalum.

As I mentioned, we planted a passionfruit vine to go with the wisteria. Jamie was really keen to grow a passionfruit, so we planted this grafted ‘Nellie Kelly’ black passionfruit last autumn. I’m training it to climb a stake, and once it’s about 4-5 feet high I’ll set it loose onto a section of black plastic trellis. (I still need to attach the trellising, but that’s the plan.) Our climate feels awfully borderline for growing passionfruit, but it’ll stay warmed up by that sunny, dark-coloured wall.

We’ve also got an established grapevine on the far side of the carport. Last year it put out a ton of vines and no grapes. Booooo. We hacked it to the stubs this winter, and so far so good? It’s leafing out well, but it won’t flower for another month.

There’s one more spring update taken care of. I got lots more coming.