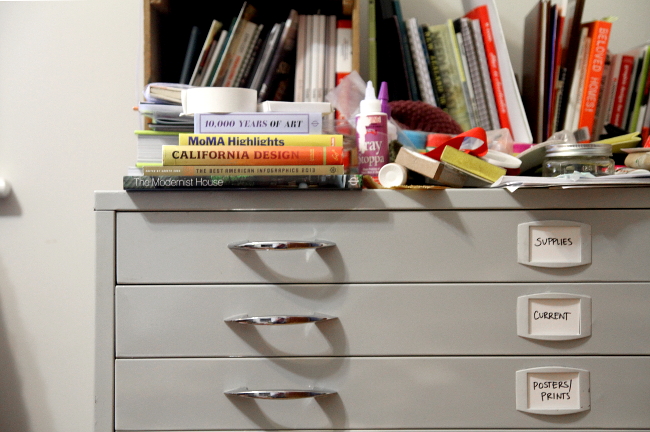 What’s grey and weighs over three hundred pounds? This guy. The flat file.

I mainly hear them described as “map drawers” or “plan drawers” — I think “flat file” is what they get called in American — because duh, they get used for storing maps, plans, and anything else that comes in large, flat sheets. These drawers are indispensable in many studio spaces, and since I seem to generate and collect a heap of printed material, I’ve been wanting a set of my own. It was an essential fixture in my plans for the study.

Flat files, though, generally cost hundreds of dollars. I kept a watch out for secondhand ones (which would still run about $600) and considered my other options, like one of those cute ALEX drawer units at IKEA, or just leaving everything in a haphazard stack of portfolios until figuring out another option. 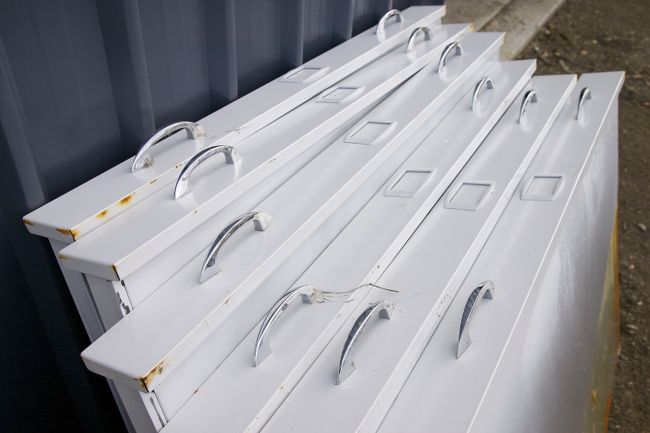 And then, wouldn’t you know it.

Some time ago, Jamie, who also uses plan drawers in the workplace as an engineer, encountered two guys in the midst of removing two sets of old plan drawers from the office. He asked them about where the drawers were going, and asked how much they’d take for one. So Jamie handed over the princely sum of twenty dollars, and the drawers were ours. I can’t believe it either. I think I used up my lifetime allotment of good luck on this one, everybody.

The drawers needed work, but I didn’t get to them right away. I don’t remember why. Excuses. So there they sat, right outside the work shed belonging to Jamie’s dad, for at least six months. They collected rainwater, they copped it from saltwater winds. The rust situation wasn’t looking good.

Finally, I got around to cleaning her up. I didn’t get a picture of the entire body or the sheer amount of rust before doing anything — it made me feel overwhelmed just looking at it — but cleanup and painting was pretty straightforward. Jamie’s brother was around, and he gave me advice and helped me lug around these giant drawers. He’s a good dude. (In fact, we’re currently working on fabricating a steel shelving unit for the study.)

Here’s what I did: 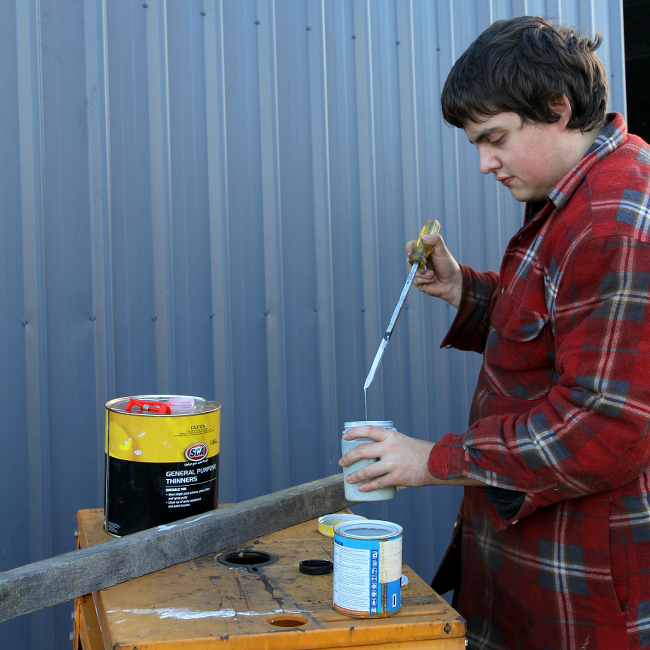 Here’s Sam, advising me on how to use the paint sprayer, which is hooked up to an air compressor. You’re meant to thin out the paint with paint thinner, enough that it runs off the end of a screwdriver in a stream but just breaks before hitting the surface. 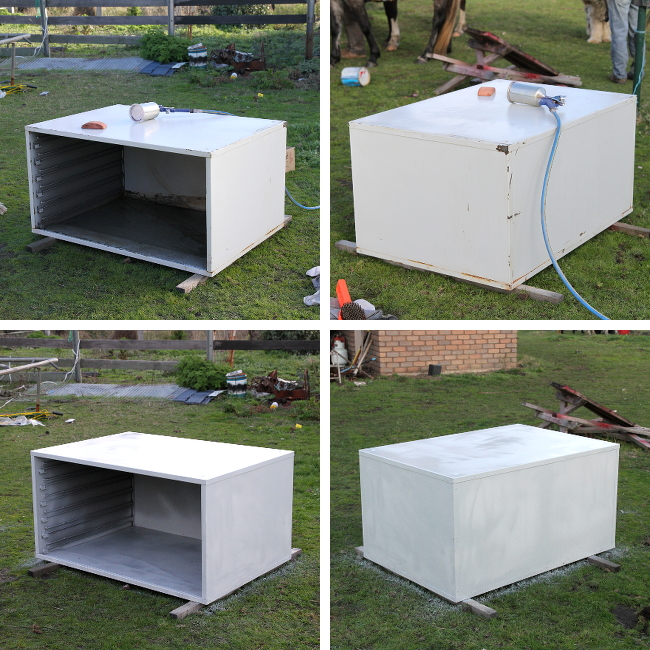 It can be a pain to set up (and clean out) the paint sprayer, but it had multiple advantages: the coats were factory-smooth, the thinner coats meant the paint would go further, and it didn’t take very long at all to spray everything down. 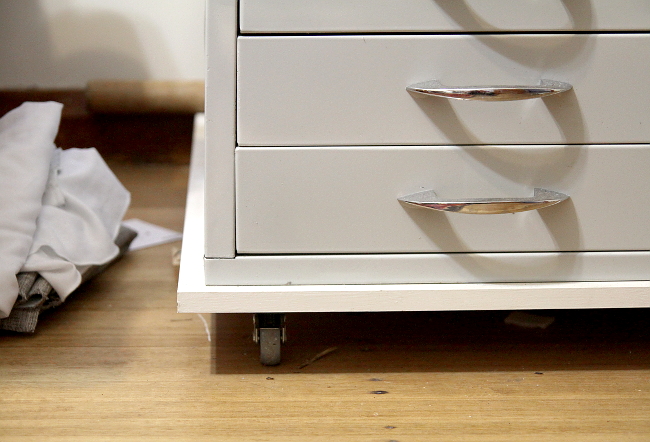 Once it was all painted and dry, it finally arrived at our place. Ahhh! So exciting.

I would like to mention, once again, that this flat file is large and heavy. Once we sat it down somewhere, it’d be difficult to get back up again. So I put together a low trolley bed using a 1200×900 sheet of MDF and six braked castors. That way it’d stay mobile. It definitely helped us move the thing into place. 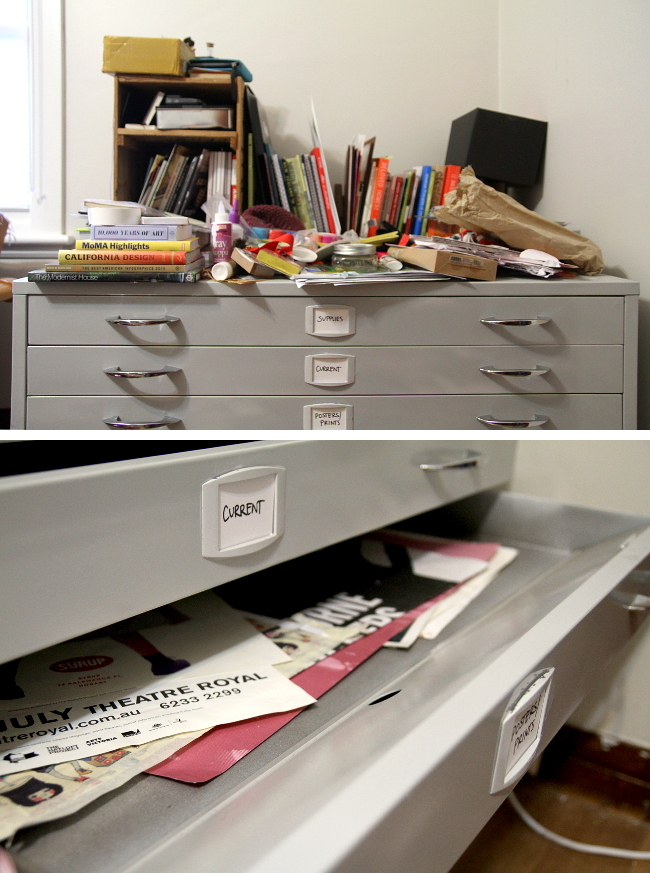 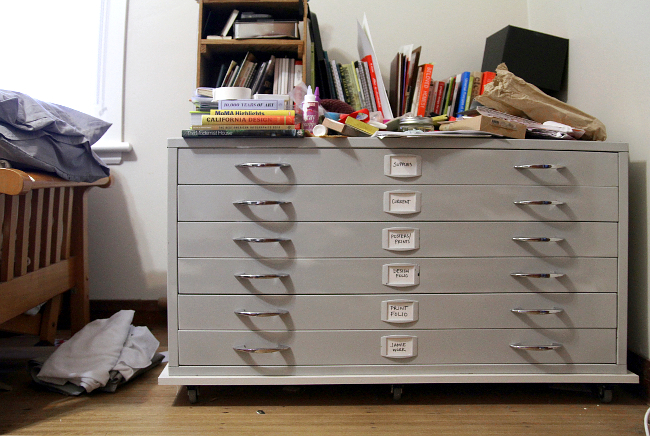 Here she is, brought into place. Forgive the mess; that’s all due to be organised and put into place once we finish off the steel shelves.

I like having the massive, A0-sized drawers. They’re also deep enough to hold paints and a few odds and ends. The light grey paint turned out darker than I’d have liked, but I felt that white would yellow over time and black would turn it into a monolith. It really doesn’t matter; I’m just happy to have a set of plan drawers in good condition. We might get tired of some of the furniture we get, for whatever reason, but not this guy. The flat file is FOREVER. 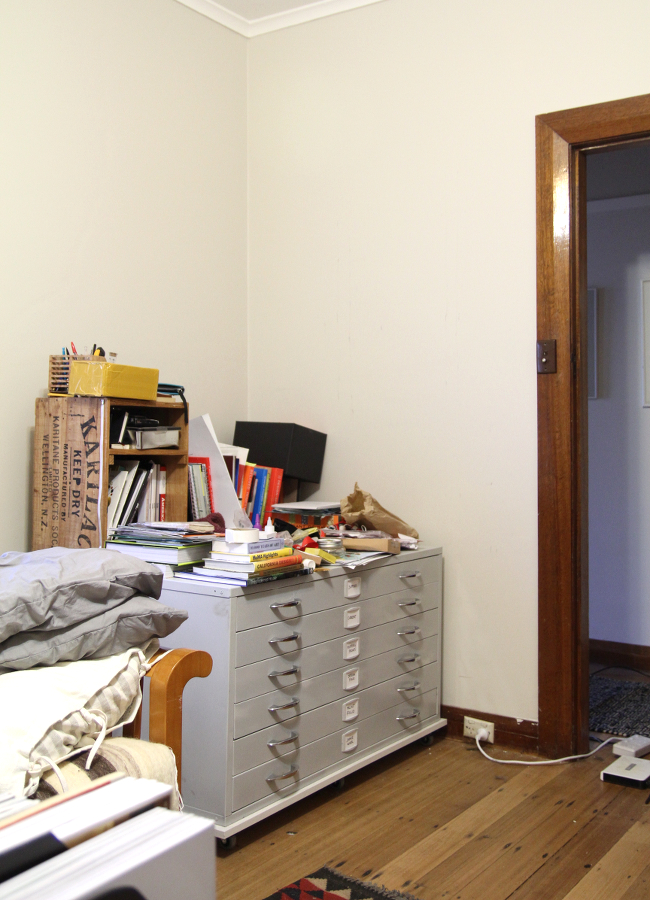 And there’s that quadrant of our study right now. It needs cleaning and organising, of course, and since the cabinet is too deep to comfortably have shelves mounted above it, I’m just thinking posters and a little tea station, perhaps. (Jamie is the driver behind that idea; apparently leaving the room to make a cup of tea is the worst, sometimes.)

There’s a sneaky corner of the rug I’ve got now, too. More to come!

(Previous: Plans for the study.)

Wow - thank you so much for your interest in my ha

The pandemic situation is worsening in Australia,

Hometown memories from 2019, while I #stayhome and

This is the sort of architecture I never thought t

Phoenix Towers, Phoenix AZ. If I lived here I woul

How do you use social media to its best advantage