The study isn’t just a work space, it’s also a sit-and-think space, a draw-on-the-couch space, a chat-with-Jamie-while-he-plays-computer-games space. It’s also been a nice little retreat within the house on warm days. I picked out a few furnishings, and I have to say, the cozy factor has gone up significantly. 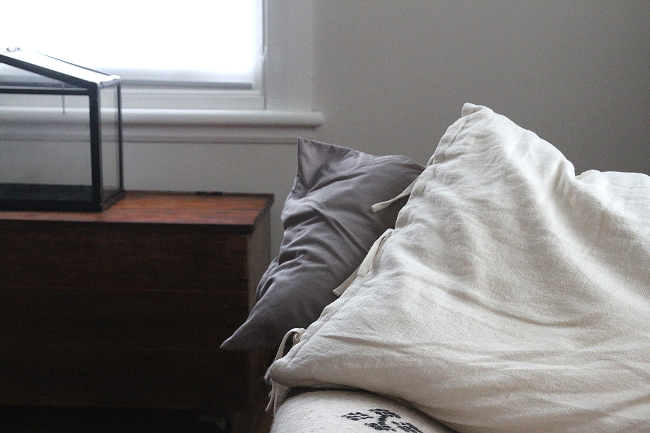 The futon itself is one we’ve had for a couple of years. It’s not the classiest fold-out sofa out there, but hey, it’s got a sturdy timber frame and it does its job. A few months back, I found a wool rug on eBay that I thought would go on the floor, but it was so delicate that it became a blanket instead. (I fully admit I regularly had this thing wrapped around me in the office chair last winter.) Mostly, though, it’s serving as a cover for the blah-looking futon mattress. Not that ours is in bad shape or anything, it just looks like, you know, a futon mattress.

The futon is also our guest bed, so it needs linens and a warm rug to go with it, which live in the blanket chest under the window. There’s too many pillows here, but I do like the large, textured pillows from IKEA with ties on the ends.

(NB: I misplaced the lil’ clip-on bit that attaches the camera to my tripod, so these photos aren’t as great as I’d like. We will endure.)

I hemmed and hawed over this Gumtree ad. I (silently) hemmed and hawed over the table in person. Is it actually nice-looking? Do I really want to pay $50 for this thing? I’m glad I did bring it home, though. It breaks up all the rectangles going on, the round glass top is visually lightweight, and I’m into the ‘70s vibe. I even like the smoked glass. You know it’s actually vintage. 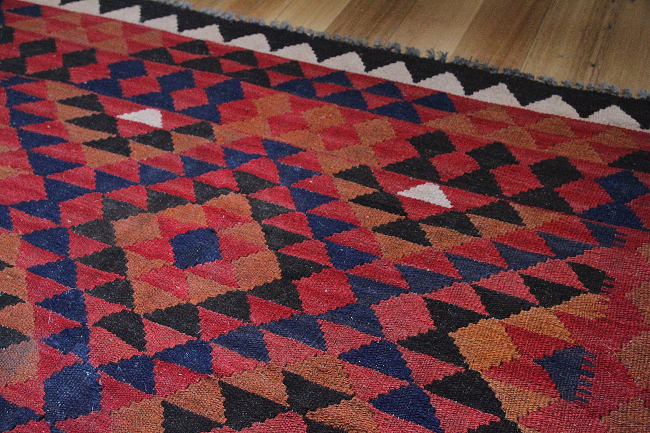 I’m gonna just say it, eBay is my go-to source for rugs. The local selection in Tassie can be lacking at times, and if you’re into vintage kilims and Persian rugs, then eBay is a gold mine. It’s daunting to choose one! What if one you like even more gets listed next week?? Last month, I pulled the trigger on this geometric-patterned lovely, which was hand-woven by Uzbek weavers in central Afghanistan, according to the listing. Neat. 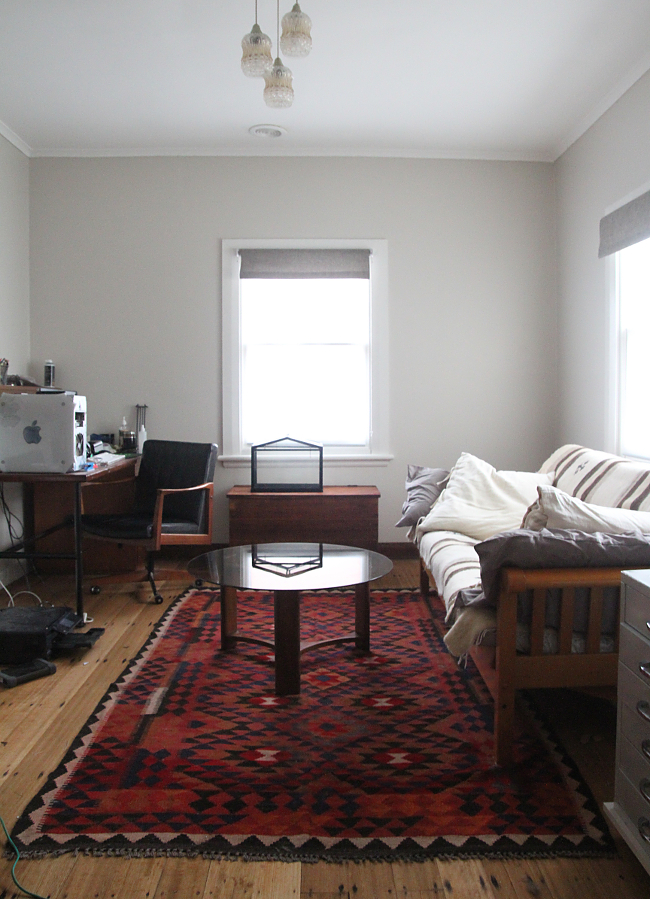 It’s extra nice to have the couch and rug, because real talk, multiple corners in the study are looking wrecked right now. The desktop and flat file surfaces still need organisation, I haven’t built a workbench yet, and right after I took these photos, I started building a brick hearth for the fireplace. I’m also putting together Jamie’s tea station; carefully chosen vintage (read: thrifted) crockery is going to be the go, I think, with a kettle of his choosing. He’s the primary tea drinker in this house.

At least I made roller blinds (more on those soon!) and the steel shelf is nearly ready to slide in to the right-hand corner by the window.

One more coat of paint and it’ll be ready to get loaded up with books and supplies. Yay!