Oh, summer. December/January is the busy, super-social season around here, so I’ve been a little out-to-lunch this month, catching up with everyone we hadn’t seen in weeks. In the evenings, Jamie and I have been catching up on garden work and assorted projects. The days are long, the beaches are beautiful, our garden is filled with more produce than we can eat. (Seriously; we went away for six weeks and the veggie beds had transformed into the Secret Enchanted Broccoli Forest by the time we returned.) I love this time of year. It makes me forgive Tasmania for the nine months of chill and being cold inside my own house. It’s okay, it’s okay.

Our deck — or outdoor room, if we’re feeling fancy — is seeing lots of use right now, and as ever it’s continuing to evolve. I can’t just ‘knock out’ a space and be done with it, no, I make changes gradually and consistently while keeping an eye on our budget. It’s like we live there or something.

Last spring, we’d stripped and re-stained the deck, and this year we gave it a top-up with merbau decking oil. (The chairs are due for a fresh coat of oil, too.) The laserlite sheeting over our deck filters out a lot of UV and it protects against the elements, so the deck wasn’t looking too shabby, but the oil still refreshed it nicely. Hooray, annual maintenance.

I also finally painted all the railings, the bottom rails and even the downspout. Yaaaay.

So hey, welcome to the deck as it is now. Have a seat.

We just want a casual, comfortable space out here that people would want to spend time in. We chose to forgo the typical outdoor furniture table set since they take up a lot of room and we wanted the space to remain adaptable. I like having the coffee table out here, it feels more intimate when you have people over.

Granted, the coffee table is a $10 tip shop garbage special, so it’ll go eventually, but using that one for a year has made me reconsider having anything super-new out there. It’s nice, having a table surface that I don’t have to worry about.

(See that slab on the left, just hanging out on top of milk crates? That’s going to be a bench one day, if I can stop mucking around and finish off the base already.)

The string lights are a recent addition. I was picky; I wanted warm white solar LED lights, and they just got them in stock at Bunnings. The solar panel is on the weaker, dinkier side, so the lights aren’t bright enough to light a space on their own, but they still look festive and cute. (Jamie has proposed jerry-rigging them with a stronger solar battery.) I have to say, solar Christmas lights make a lot of sense in the southern hemisphere.

The deck is usable in all seasons, but we’re adding a couple elements to keep it extra comfortable year round. Last winter we got an outdoor cylinder gas heater, which made such a difference on winter days and spring nights. Jamie wants to take it another step further and install clear bistro blinds sometime this year, so that you can hang out here on winter days with the heater going. We don’t need them, but I admit I’m kind of into the idea of having a winter conservatory.

The succulents weathered winter just fine. Maybe I should just fill the deck with succulents? I’m particularly impressed by the jade, or money tree – that thing grew a lot in the space of a year. The spring cactus also looks rather cheerful when it’s in bloom. 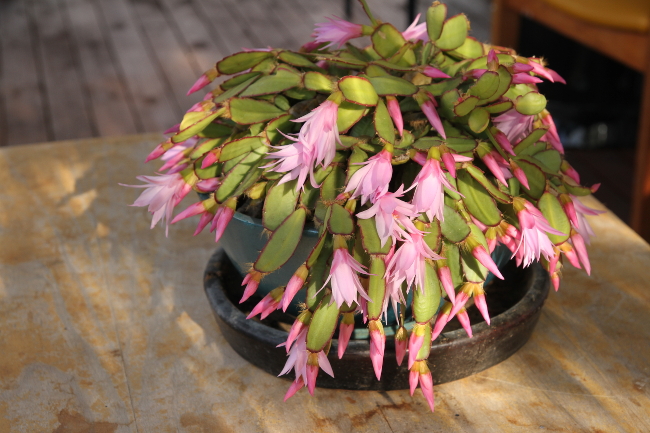 There’s two exterior projects that we plan to achieve this summer: stripping back and repainting the west/north walls of our house, which includes the wall adjacent to the deck, and edging all the garden beds with pavers. I feel a little overwhelmed thinking about them, to be honest. (That’s a lot of scraping. That’s a lot of digging.) But hey, at least the deck is right around the corner. 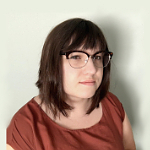